„Eve Braintree, Director of the Center for Media Studies at a well-respected US university, finds herself plagued by dwindling budgets, egomaniacal rivalry, and academic corruption. Any weakness would be her undoing. Only her tomcat has her back. Then, unexpectedly,  Eve wins a powerful consort.”

University intrigues, academic smoke bombs, and romantic love:  “Academia” is a delectably tart satire on the world of higher education.

Karen Ruoff, born and raised in Compton (California), has lived in Berlin since 1970. She studied Literature and German Studies at Stanford, Philosophy and America Studies at the Freie Universität Berlin.  She has been director of Stanford-in-Berlin since 1980. ACADEMIA is her first novel. “On the banks of the Thames, children playing find the body parts of the greatest criminal in the British Empire, and only one knows how they got there ...

London in the 1700s consists of two cities, and violence reigns in both. In the underworld, burglars and contract killers fight for supremacy, at court, ministers and aristocrats fight for the Queen's favour: everything is under Queen Anne Stuart's control, religious and political dissidents are declared enemies of the state, sentenced to the usually deadly pillory and locked away in the most feared dungeon in Europe, Newgate Prison. Like Daniel de Foe, entrepreneur, journalist, church opponent, secret agent against his will and intimate enemy of Queen Anne. But when he discovers who is really pulling the strings in London, he sides with the criminals against the authorities - with the support of his sharp-eyed wife Mary de Foe and the irreverent Margaret "Midge" Crane. And to escape his destruction, he plans one last, spectacular coup. In The Crow Conspiracy, Markus Gasser tells about truth and dignity in a corrupt world, about poverty, epidemics and war, the fine line between guilt and innocence, about the emergence of investigative journalism under the pressure of censorship, fake news, populism and paranoia - and about love in loveless times”.

Markus Gasser, born in 1967 in Austria, is a novelist, essayist, university lecturer, critic and creator of the popular YouTube channel "Literatur Ist Alles". “The new world order presents Germany and Europe with completely new challenges. The times when we could manage in the shadow of the USA are over. Josef Braml takes stock of our geopolitical situation and shows what is at stake.

For decades we could rely on the USA. But the world power is ailing. It is focused on its national interest and the confrontation with China. To believe that the US will help represent our interests is the transatlantic illusion. We must become more independent: militarily, politically, economically. That won't happen overnight. But if we don't start now, we will be among the losers of the new world order and forfeit the foundations on which our prosperity is based”.

Dr. Josef Braml joined the German Council on Foreign Relations (DGAP) in October 2006 as editor-in-chief of DGAP’s annual Jahrbuch Internationale Politik. In June 2019, he became head of DGAP’s The Americas Program. Since January 2020, he also serves as the secretary-general of the Trilateral Commission’s German Group. 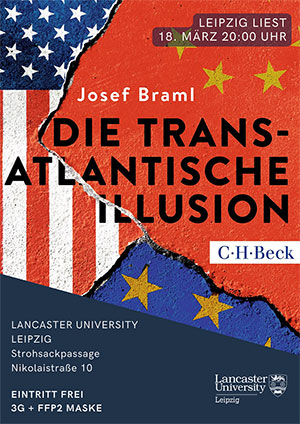 Entry is free, 3G with FFP2 at all times.